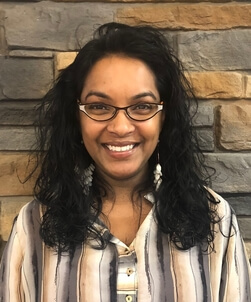 Dr. Natasha Sookermany, O.D., graduated from the University of Waterloo School of Optometry in 2006 achieving status on the Dean's Honour List.  She is also an alumnus of the University of Manitoba with a Bachelor of Arts Degree and a Bachelor of Science Degree.  During completion of her doctorate degree, Dr. Sookermany completed two externships; one here in Winnipeg with 4 local ophthalmologists and the second in Prince Rupert, British Columbia.

Dr. Sookermany was born and raised in Transcona, here in Winnipeg and was eager to return to her hometown to pursue her optometric practice.  She spends much of her spare time at her cottage property boating and fishing with her family and is a talented musician with years of practice playing many instruments including piano, steeldrums, and bagpipes. Her love of travelling has taken her to many countries including Trinidad and Tobago, Thailand, and Japan.